Season Subscriptions for MET’s MainStage Series are flexible and affordable ways to save money while supporting Maryland Ensemble Theatre. Your purchase lets you choose seats and dates before the general public. Plan a season full of date nights, girlfriend gatherings, and family time in one easy step.

Each Flex Pass includes Three MainStage tickets to be used in whatever way the pass holder would like – all for one show or mixed up between shows.

Olympe de Gourges,  Charlotte Corday, Marie Antoinette and Marianne Angelle are losing their heads! While the men engage in hypocritical rhetoric, these badass women plot to take down the extremists in this comedy set during the French Revolution’s Reign of Terror. For mature audiences only.

NO, VIRGINIA
A Grown-Up Holiday Farce

Santa Claus is coming to town!  Or rather, Tiffany hopes she can get a Santa to come to the Christmas party she’s throwing for her daughter, all the while juggling a meddling mother, an irritating ex-husband, an ardent ex-boyfriend, and a potential blizzard!  No, Virginia is a MET-original heart-warming holiday comedy, so hang your stockings and say your prayers.  You-know-who is coming! For mature audiences only.

In 1967, where Motown is the soul of Detroit’s party scene, a brother and sister who have turned their basement into an after-hours joint find conflict as they both have different ideas about what to do with their inheritance. A mysterious woman finds her way into their lives and brings the family business to the brink. An unflinching look at race relations during the turbulent Civil Rights Movement. For mature audiences only.

On a warm summer night, Norm and Corky invite another couple to their home to watch a once-in-a-lifetime meteor shower. The new friends turn Corky and Norm’s lives upside down in this wildly unpredictable play that bends the nature of time and reality to create something surprising and unforgettable. An absurdist comedy from the mind of legend Steve Martin. For mature audiences only.‘ 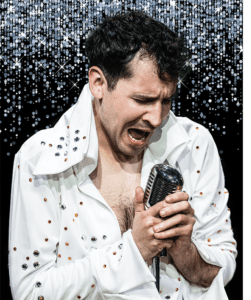 THE LEGEND OF GEORGIA MCBRIDE

Casey is barely making ends meet as an Elvis impersonator at a Florida bar when management fires him and replaces him with a drag show. With rent (and a baby!) due, he must let go of “The King” and find his inner “Queen”. The Legend of Georgia McBride is a comedy filled with one-liners, touching family moments, and killer dance moves. For mature audiences only.